I Don’t Play Tennis…. How Can I have Tennis Elbow?!

Once upon a time, I had a friend I played tennis with. We used to go out a few times per year and re-learn on each occasion that we were quite terrible at the game. Even during our warm-up rallies, we consistently hit every ball over the fence. After we had fished them out of the bushes, we carefully selected the balls we liked the best, deluding ourselves that it would improve our game. Then off we went, playing our hearts out like it was the Wimbledon final.

Once we remembered how the scoring worked (how the word “love” makes it onto a scoreboard is still beyond me), we would slog through our game. Picture this: two middle-aged men running all over the court, sweating and swearing profusely, and occasionally managing a half-decent shot. Our serves (mostly into the net), our forehands (mostly bouncing well beyond the baseline), and the awkward-looking backhand (that never went anywhere but into the stratosphere) all had the coordination and grace of a newborn giraffe taking its first steps. We would have been embarrassed if we weren’t so mad at our rackets for hitting our shots in the wrong direction. Before long, we would end our tennis match exhausted, and yet strangely satisfied that we managed to hit the ball over the net enough times to complete a full game.

As the years went on with our tri-annual matches, we never suffered any worse injuries worse than the occasional blister on our feet. Despite our dismal fitness, not once did we ever get the eponymously-named Tennis Elbow.

However, five years later I got a text from my former tennis buddy, saying, “I can’t believe it. I have lateral epicondylitis and it’s driving me nuts. WTF?! It’s been years since I swung a racket!”

Sure enough, he was suffering from Tennis Elbow (what health care providers call lateral epicondylitis), which I assumed was because he was swinging a racket with others (“playing the field”, so to speak). But surprisingly this wasn’t the case! He had no more tennis experience than me, and yet his forearms were flaring up like fireworks on a July long weekend. Except less pretty and more painful.

So where did the Tennis Elbow come from?

Not racket sports, as suggested by the name. The main culprit in Alberta is an activity that many of us partake in, namely FARMING. Really. Not tennis, farming. He had been feeding too many cows, forking too many hay bales, and pulling too many wrenches. The manual post-hole auger set it off, then the chainsawing made it a lot worse. Nope, my buddy’s Tennis Elbow wasn’t from tennis. Not even close. It was everyday manual labor.

We treat patients with Tennis Elbow all the time, many of whom have never touched a racket of any kind. They’re bus drivers, massage therapists, homemakers, health-care workers, plumbers, arborists, electricians, musicians, and many others who use their hands on a daily basis. All this trouble is from a condition that most people largely classify as a “sports injury”, but the causes of Tennis Elbow are far more broad than just sports.

It works like this: many of the muscles on the back of your forearm attach to a bony bump on the outside of your elbow called the lateral epicondyle. These muscles have some pretty complicated names – extensor carpi ulnaris, extensor digit minimi, extensor digittorum, extensor carpi radials brevis – but they all originate at the same place. These muscles control your hand, wrist, and fingers, specifically making them extend (i.e. go back, straighten out). They’re all essential for properly performing a tennis backhand, hence the name Tennis Elbow.

As we talked about, you can get lateral epicondylitis by doing anything repetitive with your hands – bus drivers constantly turn a steering wheel, arborists grip a vibrating chainsaw for hours on end, mothers lift and carry their babies – thus many things can cause this area of the elbow to become inflamed. In particular, a new hobby or activity that your body isn’t used to can create problems if you don’t ease into it correctly.

Like my tennis friend. He was a white-collar healthcare worker with hands as soft as a baby’s backside, whose wife convinced to buy a farm (okay, not convinced, he was a very willing participant). Up until then, his idea of physical labour was organized sports and basic house maintenance. However, his first purchase for the new farm was the biggest, meanest chainsaw he could find at Canadian Tire – it was love at first sight, naming his new “girlfriend” Daphne and taking her out at every opportunity to rip through deadfall in the forest.  Then he bought cattle and subsequently had to learn to clean stalls, haul hay, and build fences. Then the tractor arrived, which required regular wrench-turning and implement attaching. Then the garden needed work, the horses needed riding, and let’s not forget about the dirt bike. Yes, my friend had a whole new physically-demanding life on his new farm, and soon got a whole new pain in his forearms to go along with it. Viola, lateral epicondylitis.

Just what he needed.

Thankfully the solutions to such a bothersome ailment are not as numerous as the causes. While we always recommend talking to a healthcare professional, here is the general path to recovery:

We always laugh at how many patients tell me, “Doc, it hurts when I do this,” to which I reply, “Then stop doing that.” Why is this such a lightbulb moment? If you stop using the hurting body part, it gets the chance to heal. The tricky part is when such movements are part of your job or daily routine. When it comes to Tennis Elbow, try not using your hand for a day and see how that goes. However, do your best to stop or modify the aggravating activities and we’ll work on treating the rest.

Muscles usually come in pairs – agonist and antagonist. At times, one half of the pair can become weak, while the other becomes tight. In such an imbalanced environment, muscles have to work harder and less efficiently to keep up with the demands. If you can return balance to the system by strengthening weak muscles and stretching tight ones, you get to the root of the problem. Specifically, slow, low-resistance eccentric extensor exercises have been shown to improve Tennis Elbow (we’ll show you what this means at your next visit).

This does wonders for inflammation, which is the source of the pain of Tennis Elbow. Fifteen minutes a few times per day is usually sufficient to relieve flare-ups when they occur.

The vibrations that ultrasound transceivers send into achy tendons helps reduce inflammation, increase blood flow, and promote healing. This works best in conjunction with other physiotherapy techniques (like massage, exercise, and stretching.

This technique modulates pain transmission along nerve fibers. Overall, it can be highly effective to relieve pain at the lateral epicondyle, even within minutes of the treatment being performed.

Specialized athletic tape can support injured muscles and tendons, thereby reducing strain and further injury. It can also reduce swelling and dampen the sensation of pain while applied.

Remember the old song that goes, “the foot bone is connected to the leg bone”? Everything in your body is connected, so injuries are rarely due to the dysfunction of just one joint. In fact, it’s not unusual to see issues show up in areas of the body that are far removed from the original problem. For Tennis Elbow, if biomechanics of the wrist, shoulder, or neck are not correct, it can cause excess stress on muscles of the forearm. Chiropractic adjustments can correct these faulty patterns, making the healing process happen a bit quicker.

A small brace around the upper part of the forearm can relieve strain on the inflamed tendons that cause Tennis Elbow. They’re quite popular for those with lateral epicondylitis, but they typically aren’t the cure-all that one might think. The quality of these devices is highly variable. When it comes to braces, don’t skimp on the price – if you pay $5 for the brace you will often get $5 worth of results.

If you are suffering from Tennis Elbow, know that there are many things you can do to mitigate the symptoms and help it heal. Don’t suffer. Book an appointment with us at Pure and see what our dynamic multi-disciplinary team can recommend to help you out. And if you find yourself in sudden possession of a new farm, maybe ease into the manual labor before you bring your own Daphne home. Your elbows will thank you later. 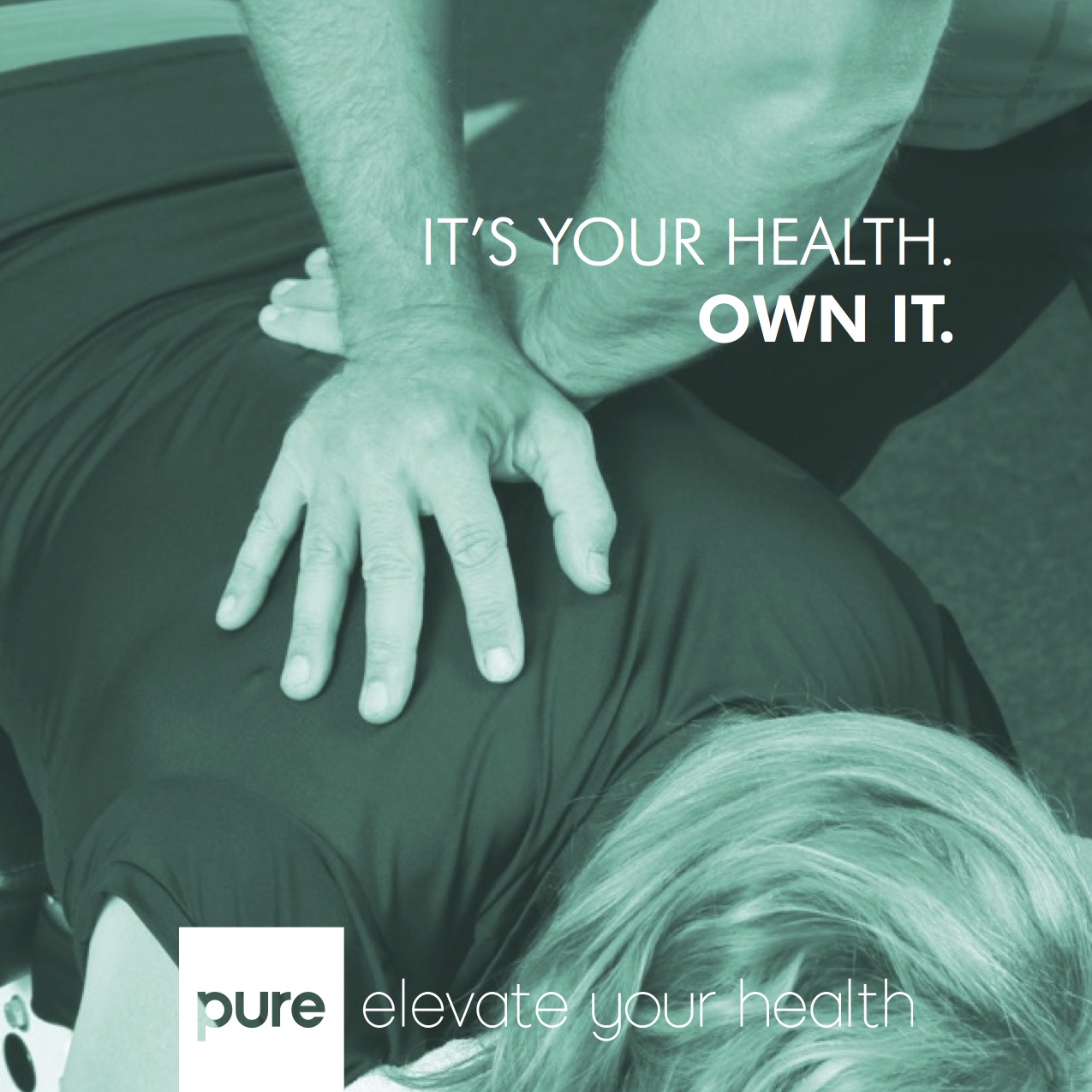